The Spreydon Lodge bred Franco Jorik looks set to play a big part in the upcoming feature races for 2-year-old trotters after smashing the NZ record for juvenile trotters over 2,600m at Addington Raceway on Friday evening.

The Greg and Nina Hope trained gelding worked to lead mid race, handed up to the race favourite Mighty Flying Rocker and then trotted strongly to the line up the passing lane to score by a neck.

His time of 3:27.5 bettered his stablemate Eurokash’s record set the previous evening by 2.2 seconds and lowered the previous holder Master Lavros’s 2011 record by more than five seconds.

It was the Muscle Mass gelding’s debut win following a tidy second just prior to racing being shut down back in March due to Covid-19.

Out of the Group 2 winning juvenile and Harness Jewels placed Jacanti Franco, Franco Jorik was purchased by the goHarness Hoofin Around Syndicate for $22,000 at the 2019 New Zealand Bloodstock Sale of Trotters. 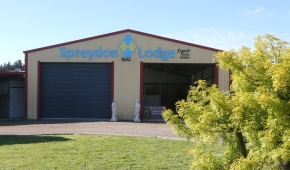 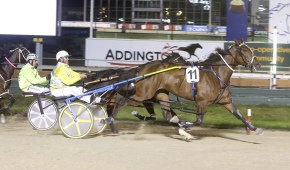 Franco Norton: The winner of one from three starts to date.